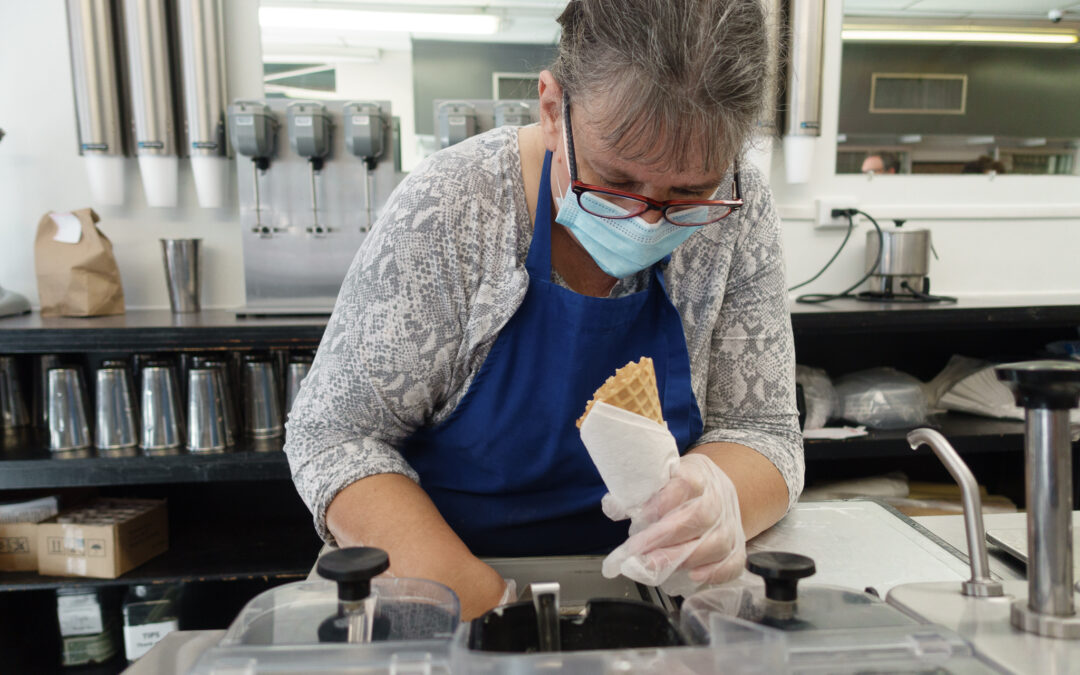 The Ice Cream Lady and what would have helped this image.

This image didn’t place, but here are my thoughts on it. The color and sharpness are good, the exposure is good, the moment, however, is not quite there. We want to see the ball in the scooper. That is the prize in this image. The image presents a style of Americana that existed in the 1950s, so in a sense, it pays homage to a past long gone, but it’s missing the prize, the part we all want to see, the ball of ice cream in the scooper. Sure, right now, one could say it’s very mysterious. We can all anticipate what will be revealed when she raises the scooper past the top of the container, but that’s not enough to give the image a podium finish. Like a Norman Rockwell painting, it needs to be delivering a prize of some kind if the photo is going to exist by itself and not as part of a sequence.

What if we could see the ice cream ball and, it was vanilla? Ok, you’d have a documentary photo of a period scene with a ball of ice cream—but would that make it a good, or podium finishing Street photo? Do you think it would matter if it was in B&W or color? I think it would. If the ice cream ball was white vanilla, it wouldn’t need the color in the image—the blue smock (which would change to a deep grey, Zone III) would provide contrast around the ball and help draw the viewer’s eye to it. In color, the blue in her smock wouldn’t help the image and might even draw the viewers’ eyes away from the ice cream, even though the ball of vanilla would be the brightest thing in the image. Even so, if we could see the ice cream ball, it would be a better Street photo than it is now—but how do we take it a step further than just being a “good Street photo?”

What if the ice cream ball were French vanilla yellow or mint chip green? Both of those colors have a unique relationship to the blue in the smock that you wouldn’t see in B&W. The French vanilla is the complementary (or contrasting) color to the blue smock, and the mint green is a color harmony to the blue; either would work. Now, in color, you would know it’s French vanilla or mint chip, and it would work with the blue in the smock. Proper color pairings have a big effect on our minds. The can project smells, feelings, atmosphere, and more. But would it be a good Street photo then, or would it be more of a commercial photo, a product photo? It depends, but I’m guessing it would become more commercial product-oriented, than Street, but it could pass for a “good” Street photo as well, just not a great one, not yet anyway.

I just painted a delightful looking image into your mind, something that makes your mouth water and want to run to the fridge right now, only to be disappointed to discover that I left you a note telling you I ate all your ice cream while you were reading this. So now you know two ways this image could have been improved. But would it have been enough to take a podium spot in the competition? I don’t think so, and here’s why.

It’s not what I’m looking for in a strong Street photo. In fact, it’s not a street photo at all; to me, it’s a documentary photo. But wait! I’ve seen tons of images over history that are just documentaries of the scene. Is that what you are thinking? Ok, to be fair, they are street photography, or are they more documentary photography? Which is it? Can it be both? Of course, it can, but that is why shooting street is so tricky. No one can put their finger on what makes it street vs. documentary vs. photo-journalism. No one has said “Stop! The photo of the building you shot is a document of it on this day in history, but it’s not Street.” Or how about “I love photographing coffee cups at outdoor cafés.” That sounds more like product photography than Street. If you enjoy doing that, it’s fine. There is a whole world of information on how to do that kind of photography, but you won’t find it in the bookstore under Street Photography. Look under Architecture or Product Photography.

So here is the confusion: understand what the difference between documentary, photo-journalism, and Street is, and be clear about what you photograph so no one confuses one for the other. An image may be a document of a scene on that day in history; this could be what a good Street or documentary photo looks like, but in a competition, there has to be something more than just a document in time, wouldn’t you agree? Maybe you don’t, and you would be in the right, but if you are competing, something is going to make the judges go over the line, what could push your photo over do you think?

What I look for in a “strong” Street Photograph

My wife is a crafter and makes jewelry. Periodically, she sees other crafters appear to steal her designs. What’s worse is they sell them, but my wife doesn’t. So I told her, “design something the others can’t or won’t do because it might be too difficult,” and here’s the important part as I continued, “make something that is art! When someone looks at it, they can’t mistake it for average work; they just know, it’s art.” I feel like the world has not distinguished what is Street, and what isn’t. So, here is how I do it, or maybe a better way to put it is; the images that meet these criteria for me are the ones that please me the most and what I try to aim for in my own work. Let’s use a football analogy.

Get your photo books and absorb the image work

Do a test, go through a bunch of portfolios by street photographers, and try to figure out why you like various photos. What do they have in common; you might have several categories of images. Group them and try to put a label on each. Ask yourself, “Self? If I saw this image would I identify it as street, architecture, portraiture, food, photo-journalism, graphical, or what?” Here’s the thing, people will tell you that street photography has a very wide umbrella of sub-genres. Maybe it does, but it also blurs the lines between what is truly Street and what is something else that is being included as Street—this is why it’s so confusing.

That was a mouthful (of your ice cream)

I told you that story to tell you this one; what would make our ice cream lady a stronger street photo? What if she had two balls of ice cream on top of one another and was trying to put a third on top of that—making us wonder if it would fall off or not? To me, that would be Street. What if the photo were taken from outside the shop and there was an ice cream cone splattered on the glass melting while our girl was making a cone for another customer; is it photo-journalism? It certainly tells a story, but I would put it in Street. Which image would fair better do you think? The one with the splat on the glass or the one with the ice cream ball hanging in the balance? That said, as I mentioned in part 2 of this post, the end usage would have a lot of bearing as well. Only one of those photos works with a headline like “Smorgies Ice Cream Under Investigation for Truffle Tampering.”

A line of people is a documentary photo. A photo with one of the people squatting down to tie a shoe is Street. It’s something unexpected. Look at your list and see which categories could be mistaken for something else other than Street. Look at the ones that are unequivocally Street. Images that can’t fall into the other categories. Think about it, if you have a photo of a flower that you thought was street photography, and you put it up against something that has an element of unexpectedness, say a photo of flowers with someone dressed as a honey bee, or a flower, walking down the street; which do you think would win as floral photography vs. Street?

It’s up to you

It’s really up to you in the end. If you are just learning photography, you may be confused by what is Street vs. something else. Start with Street vs. Photo-Journalism; if you’re at an event where things are happening that the public needs to know, and time is of the essence, it’s probably not Street. Save that image for your News photography portfolio. If you like to go into old dilapidated buildings and photograph the decay, it’s documentary, not street. If you ghost a hand onto a door and show a body going through the doorway, it’s probably photo-illustration, or something else. People walking down an alleyway with the late sun casting their long shadows; that is Street, but some might consider it documentary. Yes, there are many grey areas, but try to find something that goes beyond just shooting something we see all the time. Remember when I said, you’ll know art when you see it; what if in the alleyway a cat wanders into the frame, that would elevate it a bit more than just having the people.

It doesn’t mean you shouldn’t shoot it though—it’s still a great shot and a wonderful addition to a portfolio. It just might not fair well in a contest against something that has an unexpected element.

Here are a few more images from my walkthrough Fredericksburg. Marcus and I ended up at yet another location full of vendors with tents. Think of these as sequences, instead of one-hit wonders. Click for enlargement.

Thanks to everyone who came out to the event. It’s always fun to talk with others who share the same passion for Street Photography. Cheers!

Bonus Post! Why should I post-process my work when I can get it right in-camera?

The Sony RX100 MK III has pro features the street photographer will appreciate. Learn why and how to set-up this neat little camera for rapid stealth usage.

How learning your mate’s sleeping habits can get you time alone on your vacation to take the photos you really want.

How you can discover new photographic opportunities by revisiting the same location. Strategies for finding the time to get out on your own.

Discovering the “Passages” In Your Life

“Passages” is a portfolio of images by Photographic Artist Mark Gilvey that invites us to discover the connections we walk through while going from one point to another.

How To Generate A Photography Project Idea…from a Music CD?