Mark was born in Pottstown, Pennsylvania on the 7th of July, 1961. At an early age, Mark showed an interest in the arts through sketching. As he entered his teenage years, his father (a professional engineer)  had an influence on his drawings…

…they became cleaner, more methodical, and included such subject matter as home floor plans and cars from another developing interest; auto racing.

His interest in fast cars played a key role in his artistic direction after viewing the movie ” Le Mans”.  This movie inspired him to pick up a 35mm film camera and document endurance sports car racing because of nature and the environment that the racing teams had to thrive in. They would drive in sun and rain, from day to night and this appealed to Mark. He was particularly drawn to the liveries of these cars and how they, along with the design of the car, gave them personality—it was this personality that he wanted to capture in the environments they thrived.

This continued until he saw another movie that played a pinnacle role in his creative direction; “Star Wars”. This movie employed a technique for combining art, photography and, cinematography through a camera called an optical printer. Learning how the optical effects were made became an obsession in his career. So much so that he enrolled in formal photographic training at the Art Institute of Pittsburgh. While receiving an education in portrait, studio, location photography, and darkroom techniques under professors; Fran Pionati, Harry Burns, Leon Salvion, Barry Lavery, and others, it was his keen interest in learning how to use an optical printer to create movie-like special effects. Mark would eventually get his first experience with creating optical effects and making a 6-projector (on a single screen) slide show. This very specialized equipment and technique also developed his interest in multi-projector slide presentations that drove him toward a career in Multi-Image Production.

Multi-Image presentations were very popular in the 1980s. This type of presentation was very popular amongst corporations that would hold conferences and conventions at large venues. Multi-image fitted multiple slide projectors (anywhere from 2 projectors on a single screen to 21 projectors seamlessly aligned across 5 screens) projecting slides onto rear projection screens. When multiple images were projected in sequence in a rapid-fire, they would produce an animated effect that would amaze an audience who may have been used to seeing one slide at a time. This added a very “motion picture-like” effect to the presentation. Mark worked as an art director who designed art for these panoramic presentations that Mark would photograph and composite into a sequence of images that may have had as many as 20 exposures on a single frame of film for each step of the sequence. They were then loaded into slide trays where a computer programmer would tell each projector when to turn on/off its lamp and how long to dissolve from one frame to the next.

During the last two years of his employment, the personal computer was beginning to make its mark in the creative industry. Mark taught himself how to create the same type of graphics he did on the optical print, in Adobe Photoshop 2.0.

He then went on to work for a pre-press company and design studio as a high-end scanner operator. He became the lead photo retoucher and working with the design department he composited many magazine covers for high-profile clients. As the business shifted toward more and more catalog work, Mark led the development of one of the first all-digital photo studios in the Washington DC area. Mark photographed mostly small products in this high-end digital camera studio.

Mark went on to create short videos using software designed for making special effects for client conferences and expositions. He also took an interest in 3D graphic design incorporating it into his photo composites and videos. Just before the company restructured, Mark took his design skills to the web and began learning how to create Flash animation and websites.

The next step in Mark’s career took him into web design and marketing. During this phase, Mark and the Creative Director he worked with helped small and medium-size businesses improve their brand with website design, corporate identity design, search engine optimization, and photography of clients, their businesses, and their products.

Up to this point of Mark’s career, he had spent the most part working under a creative director at each company. The next opportunity put Mark in charge of all design for a defense contractor. He was the lead graphic designer on most-all internal and external projects. His primary roles included designing art that would go into print and eLearning curriculum for the Marine Corps. He also formed the basis of a digital asset management system and created art for intern communications and public-facing media.

After being laid off in 2011, and 2013, Mark decided that it was time to find out if entrepreneurship was where he should be and formed his own company, Mark Gilvey Creative, LLC.

“At some point, you have to find out if you can make it on your own—if you can, you’ll never be unemployed again and you’ll be doing what you were meant to do.”

And so a new and brighter chapter begins. 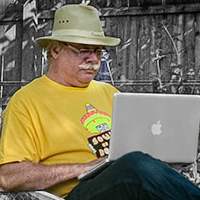